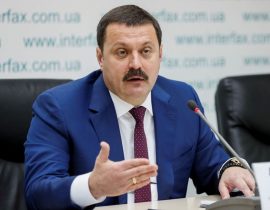 By Jonathan Landay and Daphne Psaledakis

WASHINGTON (Reuters) – The United States imposed sanctions on Thursday on a pro-Russian Ukrainian lawmaker linked to Republican efforts to dig up dirt on Democratic presidential candidate Joe Biden and his son Hunter, accusing him of trying to interfere in the U.S. election.

In a statement, the U.S. Treasury Department said it had blacklisted Ukrainian parliamentarian Andriy Derkach, who it accused of being “an active Russian agent for over a decade,” using “manipulation and deceit” in his effort to influence elections in the United States and around the world.

Derkach’s name has repeatedly come up in connection with unsubstantiated allegations by President Donald Trump, his personal lawyer, Rudy Giuliani, and some Republican lawmakers that Hunter Biden used his influence with his father to help Burisma, an energy company on whose board he sat, and that Joe Biden pressured Ukraine to fire a top prosecutor who had investigated the firm.

Derkach did not immediately return a message seeking comment, but told Politico in July it was “nonsense” that he was trying to interfere in the U.S. election.

Democrats say Derkach has helped orchestrate the Biden allegations. They and others have expressed particular alarm over Derkach’s ties to Giuliani, as well as the Ukrainian’s boasts about feeding material to U.S. legislators.

A spokesman for the Biden campaign declined to comment. Biden leads Trump in national opinion polls ahead of the Nov. 3 election.

“This announcement should serve as a reminder to those in the United States that have elevated Derkach’s disinformation and engaged with him and other foreign actors spreading similar false narratives, that their work only advances Vladimir Putin’s interests and efforts. Americans alone should decide American elections,” he said in a statement.

Derkach previously disseminated information about Hunter Biden and Burisma that Giuliani has cited as evidence in his criticism of the Biden family.

Giuliani did not immediately respond to a request for comment, but the former New York mayor has told the Washington Post that he has had frequent contacts with Derkach. The pair met in December during a trip to Ukraine as part of an effort by Trump’s allies to obtain damaging information about Biden.

Derkach also told Politico earlier this year that he notified Republican and Democratic lawmakers about materials he had published and aired at his news conferences. Among them was Republican Senator Ron Johnson, who is overseeing an investigation of the Bidens as chairman of the Senate Homeland Security and Governmental Affairs Committee, he said.

Johnson has denied receiving any information from Derkach and rejected Democratic allegations that his investigation was being fueled by Russian disinformation.

“Foreign election meddling in all of its forms from any corner of the globe cannot be tolerated. We commend the Trump Administration for holding accountable perpetrators of foreign interference,” Johnson and Republican Senator Chuck Grassley said in a joint statement.

The Treasury’s move on Thursday also targeted three Russian nationals that it said were employees of Russia’s Internet Research Agency (IRA), which was indicted by former U.S. Special Counsel Robert Mueller as part of his probe into alleged Russian interference in the 2016 U.S. election.

Treasury’s measures freeze any U.S. assets of those blacklisted and generally bar Americans from dealing with them.

One of the employees, Artem Lifshits, was separately charged by the U.S. Justice Department in a conspiracy to use stolen identities of Americans as part of an operation to “disrupt the democratic process and spread distrust towards candidates for political office.”

“The United States will continue to use all the tools at its disposal to counter these Russian disinformation campaigns and uphold the integrity of our election system,” Treasury Secretary Steven Mnuchin said in Thursday’s statement.