Texas Woman Who Bragged About Ballot Harvesting Arrested for Fraud 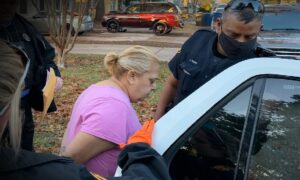 A Texas woman who bragged about being able to deliver thousands of votes for tens of thousands in cash was arrested this week on charges including election fraud and illegal voting. Raquel Rodriguez was filmed during an undercover project by Project Veritas, a nonprofit journalism watchdog group. She said on video footage released last year that she could deliver “at least 5,000” votes “county-wide” for $55,000 in cash and that would hire her “entire team.” She acknowledged what she was discussing could land her prison time. Based on the footage, Texas Attorney General Ken Paxton, a Republican, opened an investigation. That probe led to the arrest, Paxton announced on Jan. 13. “Many continue to claim that there’s no such thing as election fraud. We’ve always known that such a claim is false and misleading, and today we have additional hard evidence. This is a victory for election integrity and a strong …Read More

Ep. 2377b – Checkmate, [Zero Day] Approaches, Sometimes A Good Movie Can Reveal A Lot Of Truth

House Democrats Introduce Bill to Give $6 Billion to USPS...

Noted ‘Journalist’ Don Lemon: We Don’t Need to Hear ‘the...