It’s A Miracle! COVID Restrictions Are Suddenly Going Away In States Run By Tyrannical Democrats
LYING FOR VOTES? Biden 2 Months Before Election: “I never told the environmentalists that I’m going to...
Twitter Lawsuit Alleges Child Porn Blackmail Does “Not Violate the Platform’s Terms of Service,” Nor Does Antifa/BLM...
Make No Mistake! “Donald John Trump Incited The Erection Insurrection” – Chuck Schumer, Is He Flashing Back...
BLACKMAIL: Cash For Covid RINO Steve Stivers Demands Stimulus Checks Be Used To Force Vaccines As Chinese...
Pelosi Dreams of Murder, Calls Trump “An Accessory”
5-Star President Trump Gives Permission for US Troops to Stay at Trump Hotel in Washington DC
With Biden Sworn In, Trump May Have New “Ironclad” Legal Claim
[VIDEO] Senile Old Coot Biden hears “Salute the Marines” in his earpiece and like an idiot repeats...
Thousands of National Guard Troops Forced To Vacate Congressional Grounds, Rest In Nearby Parking Garages…Many Will Remain...
CoronaGateCurated by: Robertson Report

Both congressional leaders shared photos of themselves on Twitter having received the vaccine from the Capitol physician, Dr. Brian Monahan.

“Today, with confidence in science & at the direction of the Office of the Attending Physician, I received the COVID-19 vaccine. As the vaccine is being distributed, we must all continue mask wearing, social distancing & other science-based steps to save lives & crush the virus,” Pelosi announced on Twitter.

McConnell called the vaccine “safe, effective” and said that vaccines are “how we beat this virus.”

“Now back to continue fighting for a rescue package including a lot more money for distribution so more Americans can receive it as fast as possible,” he wrote on Twitter.

“Karen and I wanted to take the vaccine to assure the American people that while we cut red tape, we cut no corners,” Pence said.

The vaccine is produced by U.S.-based Pfizer and Germany-based BioNTech. Injections began on Dec. 14.

Democrat Joe Biden and his wife, Jill, are set to receive the vaccine on Monday, according to Biden’s press secretary Jen Psaki. She said Biden will be receiving the vaccine in public at the Delaware medical facility.

Vice-presidential nominee Sen. Kamala Harris (D-Calif.) and her husband, Doug Emhoff, are set to be vaccinated the week after next.

President Donald Trump last week hailed the Pfizer-BioNTech vaccine as a “medical miracle” following its emergency use authorization from the Food and Drug Administration (FDA) in efforts to end the pandemic caused by the CCP (Chinese Communist Party) virus.

There have been a few reports of adverse reactions to the Pfizer vaccine. Two health care workers in Alaska suffered reactions, one of which was serious, from the vaccine. In clinical trials of the vaccine candidate, four participants suffered Bell’s palsy, which is the temporary paralysis of one side of the face, caused by a neurological reaction.

The FDA advised that Americans with allergies should be safe to receive the vaccine, but people who have previously had severe allergic reactions to a dose of the vaccine, or any ingredients in this vaccine, should avoid getting the shot.

On Friday, Trump issued a congratulatory announcement after the FDA granted emergency use authorization to another vaccine, which is developed by Moderna Inc. and the National Institutes of Health. “Congratulations, the Moderna vaccine is now available!” he wrote.

Trump was hospitalized with COVID-19, the disease caused by the CCP virus, in October. 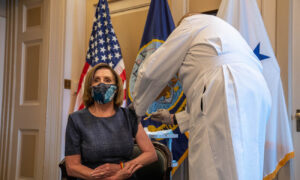