Over One Million COVID-19 Vaccinations Administered

More than 1 million people in the United States have received the COVID-19 vaccine up until Wednesday, according to Robert Redfield, Director of Centers for Disease Control and Prevention (CDC). “The United States achieved an early but important milestone today—jurisdictions have now reported that more than 1 million people have received their first dose of COVID-19 vaccine since administration began 10 days ago,” Redfield said in a statement. On Dec. 13, Redfield approved the recommendation from the CDC’s Advisory Committee on Immunization Practices (ACIP), following the Food and Drug Administration (FDA) issued an emergency use authorization on Dec. 11. On Dec. 18, Vice President Mike Pence received the vaccine. He said that “it’s a miracle indeed” to administer millions of doses to the American people in less than one year. He mentioned that experts told him that the average vaccine normally takes between 8 and 12 years to develop, manufacture, and …Read More 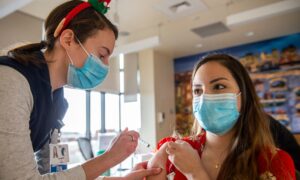 MSNBC Doom and Gloom Doc: Don’t Get Overly Optimistic About the Covid-19 Vaccine, We’re in For a “Decades-Long Battle” (VIDEO)