House Aims to Vote on COVID-19 Relief Bill by End of Next Week: Pelosi

Speaker Nancy Pelosi (D-Calif.) said House Democrats will attempt to vote on President Joe Biden’s $1.9 trillion stimulus package by the end of next week. “At the same time, there is communication with the Senate as to what the Byrd rule will allow in the bills as we go forward,” Pelosi said on Feb. 18, referring to the “reconciliation” process—a way in which Democrats can approve a package with a simple majority of 51 votes instead of 60. If the measure isn’t passed, federal unemployment benefits could end for millions of Americans who lost their jobs due to lockdown orders initiated by various state and local governments over the past year. The $300 per week federal unemployment supplement and a provision that expands eligibility are slated to expire on March 14. The legislation also authorizes the distribution of $1,400 stimulus payments to most Americans and up to $3,600 per child to …Read More 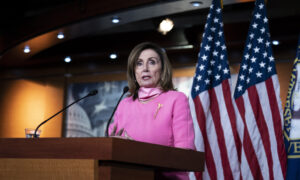 Rush Will Never Leave Us