Hollyanne Milley, the wife to the chairman of the joint chiefs of staff, has been credited with helping to save the life of a man who collapsed at a Veteran’s Day ceremony at Arlington National Cemetery on Wednesday afternoon.

According to NBC News, Milley was waiting for President Donald Trump and first lady Melania Trump to arrive for a Veteran’s Day ceremony when a man collapsed near the Tomb of the Unknown Soldier. Milley, a long-time registered nurse, rushed to his aid.

“When I first got there, he was breathing in a very erratic way that he wasn’t really taking air into his lungs as he should have been,” Milley told NBC News in an interview.

Then the man stopped breathing, and his pulse ceased.

“That big deep breath and groan is a wonderful sound when you hear silence, so everybody was so happy when he just took in that big breath of air,” Milley told The Wall Street Journal. “It was a beautiful thing.”

Milley was reportedly reluctant to share the story and declined to take credit for saving the man’s life. She told NBC News that several others rushed to the scene, including a physician, but does believe “we were all in the right place at the right time.”

She has since spoken to the man, who is reportedly a veteran in his 60s, saying that the man is “grateful that he will be here next year to again honor those who served.”

“He said because of a bystander who knew CPR that’s why he’ll be able to continue on honoring our veterans for hopefully many years to come,” said Milley, who encouraged people to take CPR classes because “bystander intervention can truly save lives.”

General Mark Milley told NBC News in a statement that his wife’s actions “were representatives of the hero medical professionals who are always there when we need them. She represents the strength and service of our military families.”

The same afternoon, Trump and Vice President Mike Pence participated in a wreath-laying ceremony at the Tomb of the Unknown Soldier, one of the president’s only public appearances since election day.

“These heroes served faithfully, humbly, and valiantly in times of war and peace, and they carried these admirable traits into the civilian workforce when their military service was fulfilled,” said Trump in a written Veteran’s Day proclamation. “Our precious liberty has survived and thrived because of generations of brave Americans — from every background and walk of life — who have answered the call to support and defend the United States. The gravity of their contribution is immeasurable and so is our debt to every single one of our Nation’s veterans.”

Hollyanne Milley, the wife to the chairman of the joint chiefs of staff, has been credited with helping to save the life of a man who collapsed at a Veteran’s Day ceremony at Arlington National Cemetery on Wednesday afternoon. According to NBC News, Milley was waiting for President Donald Trump and first lady Melania Trump 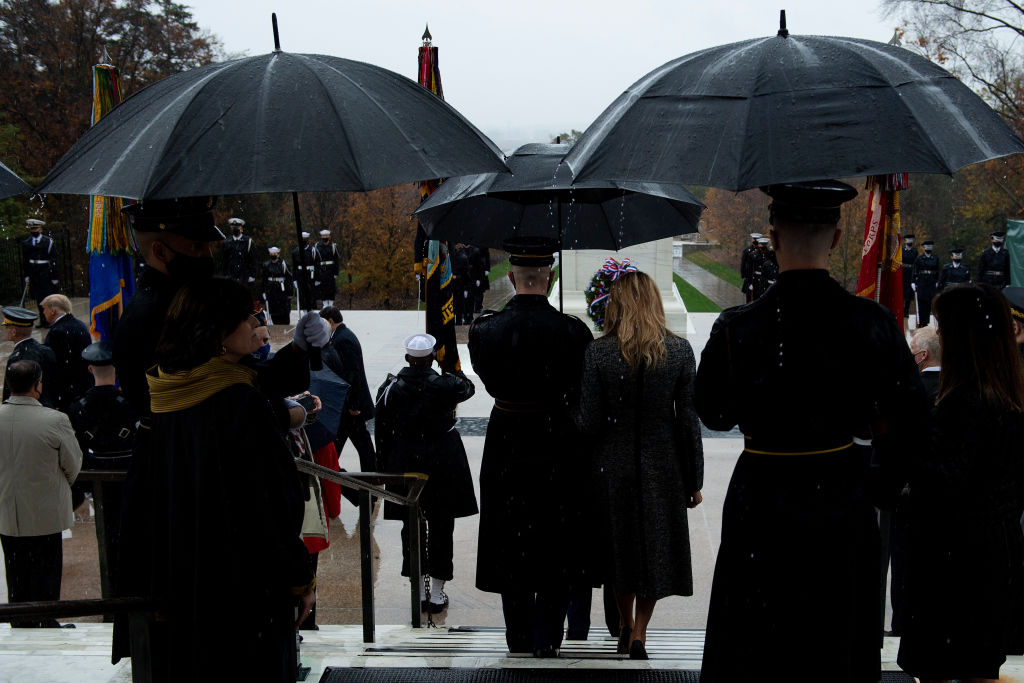