It’s A Miracle! COVID Restrictions Are Suddenly Going Away In States Run By Tyrannical Democrats
LYING FOR VOTES? Biden 2 Months Before Election: “I never told the environmentalists that I’m going to...
Twitter Lawsuit Alleges Child Porn Blackmail Does “Not Violate the Platform’s Terms of Service,” Nor Does Antifa/BLM...
Make No Mistake! “Donald John Trump Incited The Erection Insurrection” – Chuck Schumer, Is He Flashing Back...
BLACKMAIL: Cash For Covid RINO Steve Stivers Demands Stimulus Checks Be Used To Force Vaccines As Chinese...
Pelosi Dreams of Murder, Calls Trump “An Accessory”
5-Star President Trump Gives Permission for US Troops to Stay at Trump Hotel in Washington DC
With Biden Sworn In, Trump May Have New “Ironclad” Legal Claim
[VIDEO] Senile Old Coot Biden hears “Salute the Marines” in his earpiece and like an idiot repeats...
Thousands of National Guard Troops Forced To Vacate Congressional Grounds, Rest In Nearby Parking Garages…Many Will Remain...
Fake News

HAWORTH: What Riots? Over 80 Examples Of The Mainstream Media Gaslighting About ‘Protests’

For months, violence has gripped our streets. Riots have been a regular reality for several cities across the country. Businesses have been destroyed. People have been assaulted. Stores have been looted. All that is needed to understand even a fraction of the daily reality for countless Americans is a simple search on Twitter, where you will find video, after video, after video. There have been some independent journalists who have provided accurate reporting on the riots and violence; however, if you rely on the “objective” mainstream media for your “news,” you will have a completely different view of reality. The reason for this is that mainstream media outlets like CNN, The New York Times and The Washington Post have engaged in, arguably, the worst and most blatant act of journalistic gaslighting in modern American history.

Some tell outright lies. Some ignore crucial details, such as the context behind police shootings. Some downplay the nightly riots as “mostly peaceful protests.” Some mischaracterize events with irrelevant details, or excuse or justify the violence. Some shift the blame for violence, explicitly naming the political affiliations of some and ignoring the political affiliation of others. Some make unsubstantiated assumptions to justify their conclusion. Below are more than 80 examples (emphasis added in some quotes).

Cuomo says “protests” are not the problem, declares that protests aren not “supposed to be polite and peaceful.”

CNN’s Chris Cuomo: “Please, show me where it says protesters are supposed to be polite and peaceful.”

As riots and looting have broken out in cities across the country, this is the message the brother of New York governor Andrew Cuomo shares at the top of his show. pic.twitter.com/ZZ47zpyVlx

A typical Times report on the ongoing riots repeatedly describes violent rioters as “protesters” and vaguely references violence and destruction as “chaos” and “damage” that is often not directly attributed to the “protesters.”

CNN correspondent tries to downplay the chaos and suggests leftist rioters are the true victims.

The Times focuses on left-wing protesters as victims and echoes left-wing talking point that Trump incited riots by sending federal agents to protect the U.S. courthouse.

The Post laments that people are perceiving the protests as primarily violent and blames Republicans, Trump and conservative media.

CNN’s infamous “fiery but mostly peaceful protests” moment and report on “things” being thrown back and forth as a supposedly valid “expression of anger and frustration.”

NPR reports on the 79th consecutive day of “protests” in Portland, suggests riot designation is racist.

NPR boosts radical argument that “looting is a powerful tool to bring about real, lasting change in society.”

Through syntax, the Times suggests supporters of President Trump and right-wingers were the aggressors, continues its “protest” gaslighting.

CNN masks the ideological affiliation of the victim, suggests Trump supporters are the aggressors against the “protesters.”

Blow charges that by hammering the riots Trump is cynically using “white fear of violence” (which Blow implies is unfounded) and “white victimhood” as “political weapons.”

The Times reports on “the violence that has occasionally erupted amid largely peaceful protests,” portrays Trump and Republicans as spreading falsehoods about Biden’s position on the riots, takes pains to connect fatal shooting to Trump, and suggests right-wingers incited violence that resulted in fatal shooting.

CNN downplays the significance of the rioting.

Times opinion pieces paints Trump as deliberately inflaming the violence and his supporters as the true danger.

The Times chief White House correspondent shifts blame for violence (which he refers to vaguely as the “response in the streets”) onto Trump, downplays the number of rioters, looters, suggests bringing up riots is racist.

CNN security correspondent assures everyone that “the city is not under siege” and Antifa is not a real threat.

The Times paints right-wing groups as primarily responsible for the violence in riot-torn cities, continues to refuse to use the term “rioter” or “riot,” citing “protesters” and “demonstrators” instead, and uses passive voice to describe shooting of Patriot Prayer member.

CNN host accuses Trump of inciting violence, downplays severity of the riots, suggests citing the threat that protesters are targeting neighborhoods and homes is “blatant racism.”

For months, violence has gripped our streets. Riots have been a regular reality for several cities across the country. Businesses have been destroyed. People have been assaulted. Stores have been looted. All that is needed to understand even a fraction of the daily reality for countless Americans is a simple search on Twitter, where you 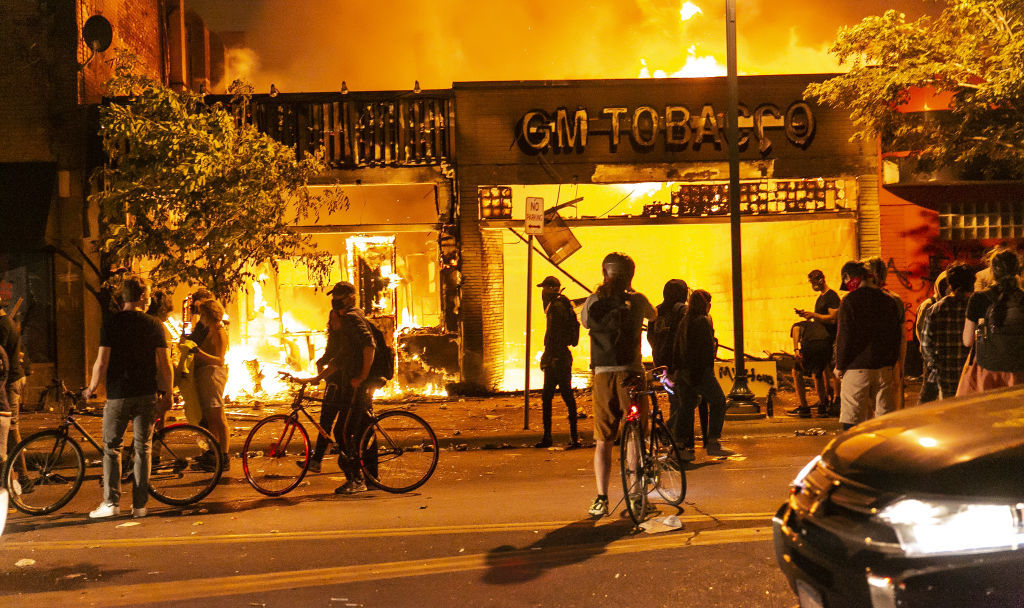 Embarrassing: WH Reporters Turn into Lapdogs for Psaki After Raging...

Get Ready for Four Years of Media Sycophancy

Big Brother MSNBC Demands Conservatives Be Silenced Unless They Speak...

Embarrassing: WH Reporters Turn into Lapdogs for Psaki After Raging...